Today I am going to work on a major restyling of a California Juniper.I collected this tree in January of 2005 in the Palmdale, CA area. This tree is probably several hundred years old with the natural shari and jins created by Mother Nature to show it.
It was initially planted in the pot shown and roughly trimmed. In 2008 I did a basic styling in the informal upright style. At that time the primary branches and some secondary branches were wired.  As is often the case with collected CA Junipers, most of the usable branches come from very close to the same area on the trunk. If you look closely at the picture below you can see that the foliage  is all on a few branches all coming from the same general area.
The tree was well fed and allowed to grow with very little interference other than to remove the wire and a light pruning once. Which brings us to now. Here is a picture of the tree prior to todays work. 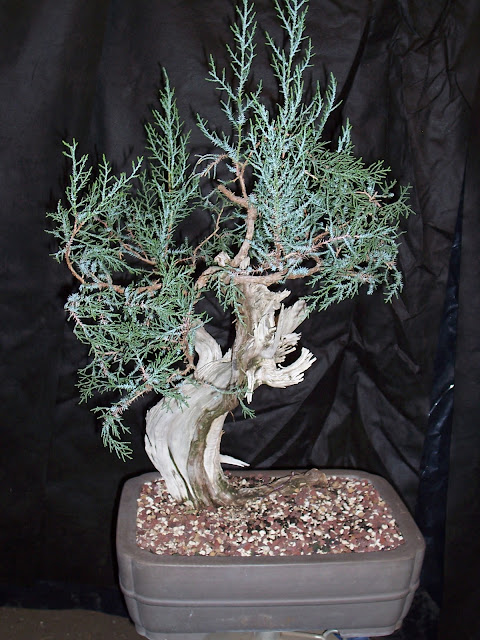 As you can see it has grown vigorously since the last work on it.  There is lots of strong new growth. Here is another view. 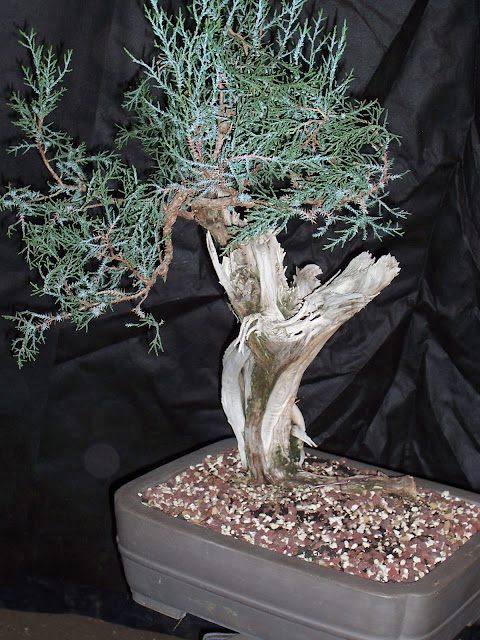 From the above view you can see on the right a long straight heavy root. On the left side the deadwood continues below the soil line. The image below shows some of the deadwood in detail. 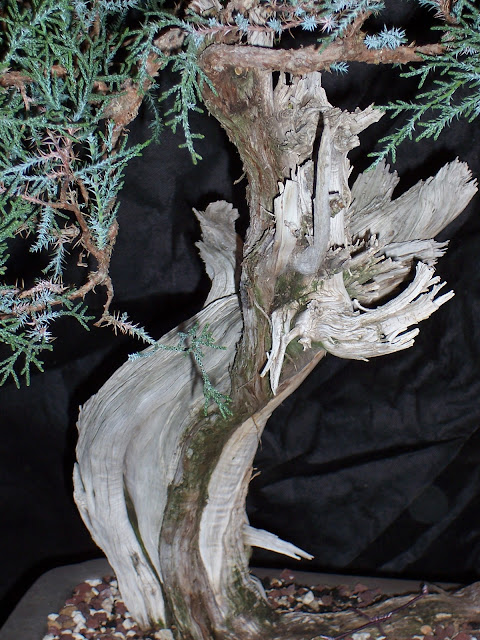 Having deadwood below the soil line is just a problem waiting to happen. The wood can't help but to rot at some point because of the constant contact with wet soil. 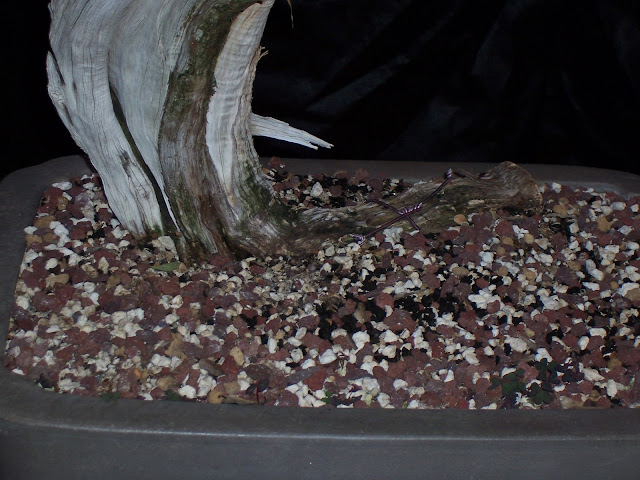 If you look closely at the above image not only can you see some rot on the trunk at the soil level,  but also some reverse taper. Since this is a several hundred year old collected tree I could probably get away with the reverse taper, but it kind of bugs me. Thinking of a solution to the reverse taper and the rot issue got me to thinking about doing something different with this tree. I started to wonder how it would look as a semi cascade.  So out came the milk crate to hold the tree and I placed it inside the crate standing on the end of the pot. This was kind of interesting as you can see below. 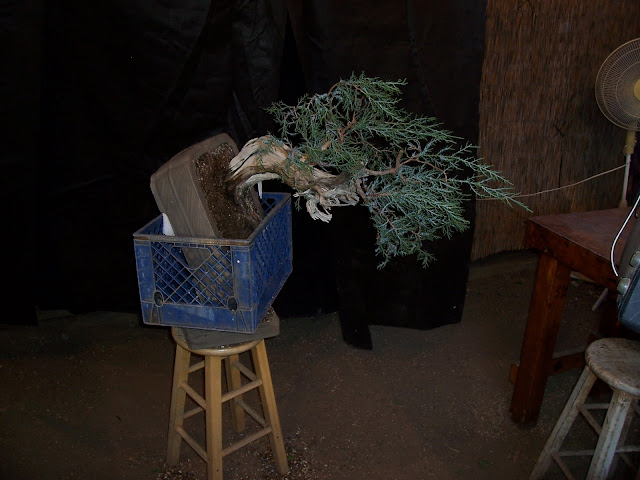 I started poking around the soil and find a little rot and more reverse taper but no roots on the left hand side. All the roots are coming off that large root on the right. Its looking more and more like this may be the way to go. 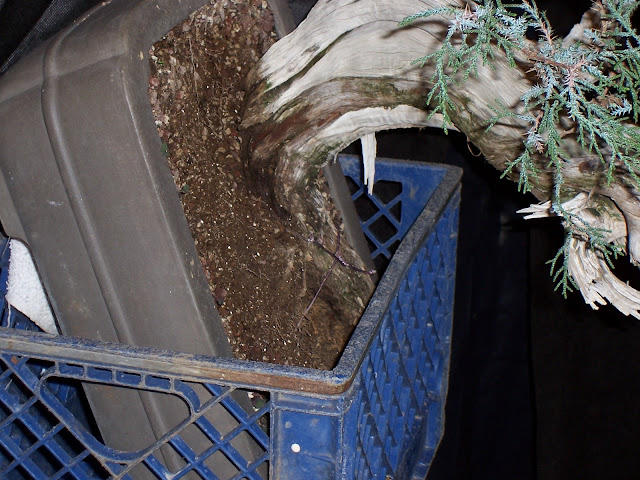 Here I have a pot placed in front of the tree to get a better idea of how this might look. I'm really starting to like this idea. 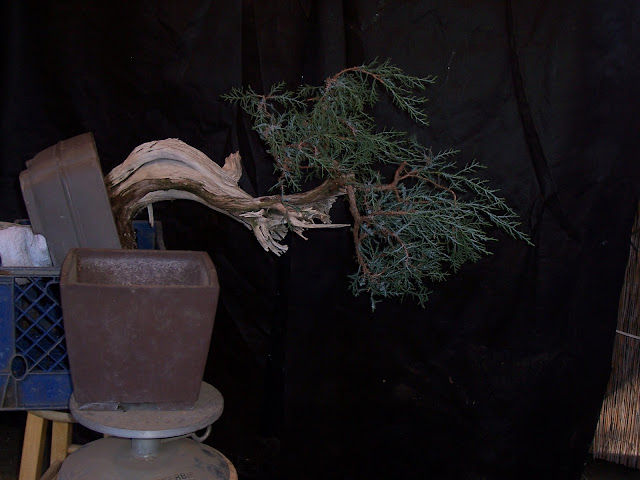 After letting this sit overnight I made the decision to go for it. Here is the tree after some pruning  and wiring on the lower branches. 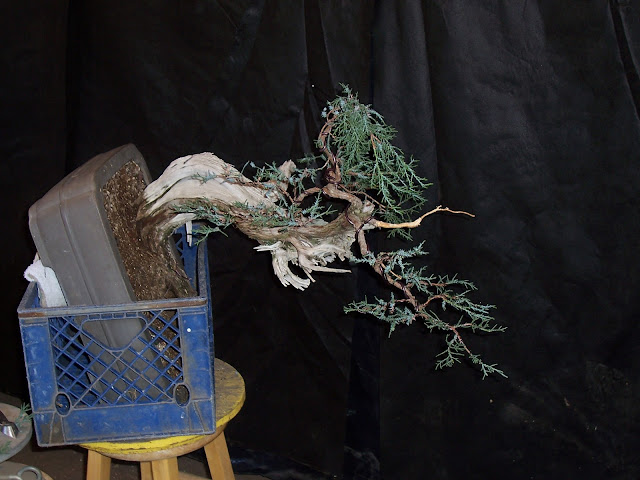 I continued with the trimming and wiring until the whole tree was wired and trimmed. 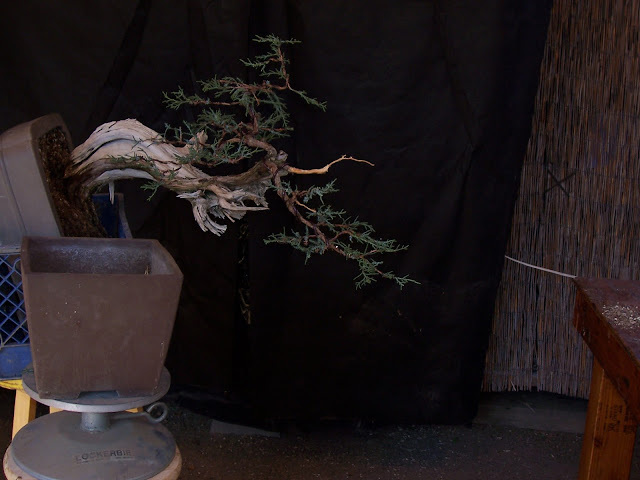 Here in Southern California we are blessed with a large window of time that we can safely repot in. Since this tree has already been in a pot and I don't plan on removing any roots not absolutely necessary, I feel its ok to transplant this now. Sorry I don't have any pictures of the repotting process but its hard to take pictures and repot at the same time. The tree winds up at a bit more of an angle then originally intended but I like the result. Take a look below and decide for yourself. 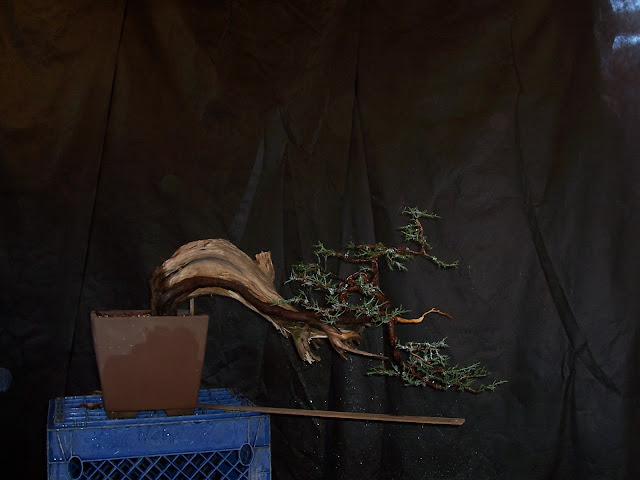 I still have reverse taper but that can be taken care of with some carving next fall. For now I'm going to let the plant recover and develop the foliage pads.
So lets take a look a the before - 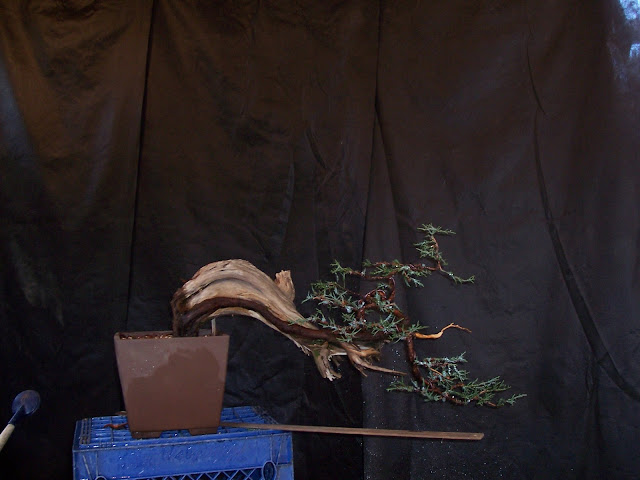 I think its a big improvement and am happy with the results.

I hope you find todays post interesting and as always I welcome any comments.
Posted by Bonsaibp at 4:56 PM 2 comments: