Happy new year to everyone. I thought it fitting that the beginning of the year post be geared towards those beginning their bonsai journey. One of the hardest things for beginners is figuring out how to start. Many will go out and buy a small seedling, because that's the only small tree they can find. Then they'll go home and post a question on a bonsai forum about how to make that seedling into a bonsai. More often then not they are told to put it in the ground for a few years and let it grow. That is not the answer that the beginner wants to hear. And just putting it in the ground for a few years doesn't insure it'll make a good bonsai.  More about growing in the ground in a future post.
Others may order something online. Sometimes that can be a great way to get bonsai material, there are no shortage of good websites that have materials for bonsai. Plants and trees from a bonsai nursery are usually more expensive than the same species of plant from a regular garden center. The difference is that bonsai nurseries tend to grow things from an early stage with the specific intention of that tree becoming a bonsai. That may include root pruning, top pruning to create branching, taper and shape and a variety of other techniques. All of these things take time and knowhow, which add to the cost, but the quality of the plant or tree is a factor as well. Many newcomers aren't willing to chance their hard earned dollars on an expensive piece of material and have a chance of it dying. One also needs to be aware of the unscrupulous dealers online who sell "bonsai kits" or "bonsai" seeds. Or they'll show a picture of a mature bonsai and send a 3 year old rooted cutting.
Another way to go about creating your first bonsai is to use common nursery materials. The are many benefits to this way of creating a bonsai. First of all you can find plants that can be used and give yourself more options.  The price is usually not too expensive and you get to see and touch the plant you're buying.The hard thing about doing it this way is knowing what to look for. First you have to understand that not every juniper, elm or whatever will be usable. You may have to look in several different places to find a suitable plant. One thing that needs to be clear is there is no such thing as an instant bonsai. The number one ingredient in bonsai is time. There are ways to speed up the process, but the main thing is time - and what you do over that period of time is important. My point is that you will not walk into your local garden center, pick out a juniper or other plant and turn it into a world class bonsai in a couple of hours. You can, however, create the foundation of a future bonsai from doing just that. And that is what I hope to show you how to do in this post.
In order to make this post realistic I went to several local nurseries ( 6 of them actually) to look for plant material that can be found most anywhere. I probably looked at and rejected at least 70-80 plants to find 7 that had some type of potential. Some of the things I was looking for were a wide base with gradual tapering along the line of the trunk, or at least the ability to create that. I also look out for usable and proportionate branching. Having roots radiating all around the trunk is another thing to look for.   The average price of each plant was approximately $8.00.
Here are the plants I bought. 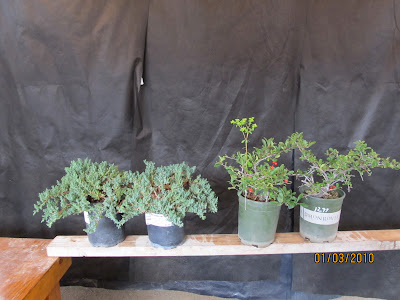 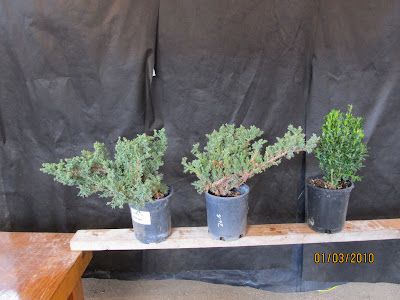 Let's start with the first Procumbins nana juniper.
Below is a picture from the top. You can see all the dead growth on the inside of the plant. This is common as the plant tends to get dense and shade out the inner growth. 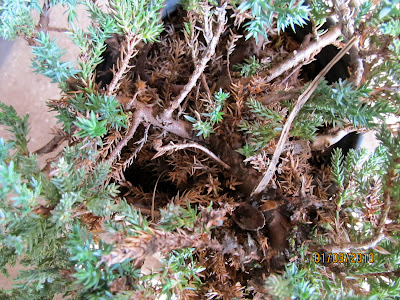 The first step is to clean all this up and remove the tree from the pot without disturbing the roots yet. 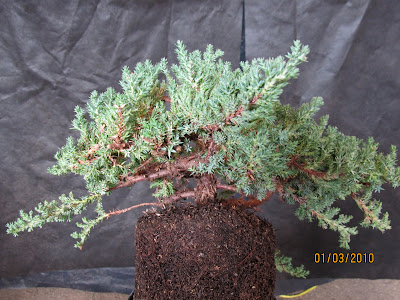 Next I'll use a chop stick to gently scrape away soil from the base of the tree so I can find where the roots radiate from. As is often the case with nursery stock, there was more trunk under the soil line.
This one had about an additional inch of trunk hidden under the soil. Next I'll look at the tree from a variety of angles to determine the trunk line. 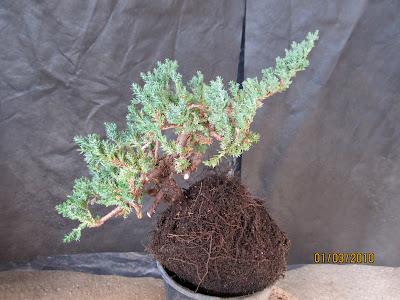 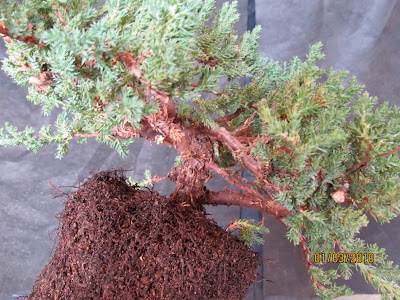 After determining the trunk line I start cutting away branches I know I won't be using, leaving stubs for possible jins. 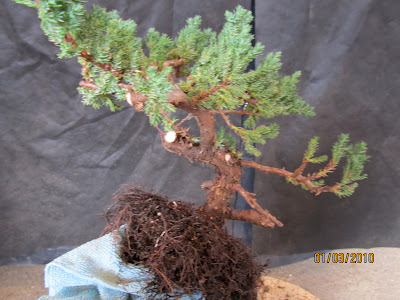 I decided to prune the roots and pot it at approximately the right angle before any other work on the top. It is being put into a training pot that is bigger than the final pot will be to allow it to grow a little more freely while in the development stage. 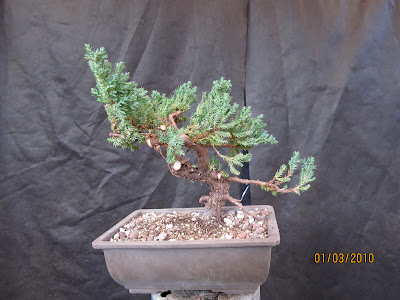 Using a branch cutter and jin pliers I made jins out of some of the stubs I left after pruning. 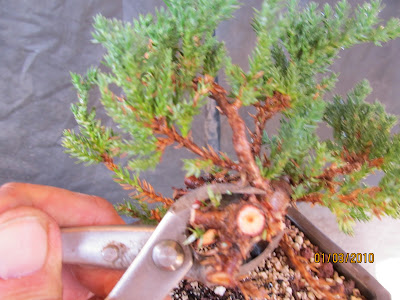 The next step was to apply aluminum wire to the branches to place them where I wanted them. 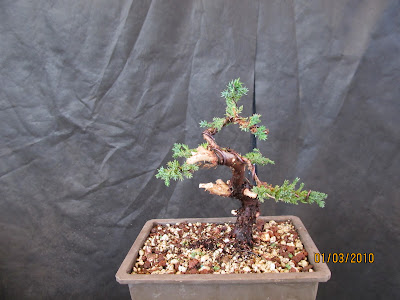 As I said earlier, it's not going to be a world class bonsai but it has the potential to become a nice shohin sized tree in just a few years. Over time shari will form on the trunk because of the withdrawal of sap where the bigger branches were cut off. Also over time and with some pinching the foliage pads will fill out and the bonsai will start to look more like a real old tree growing in tough conditions. 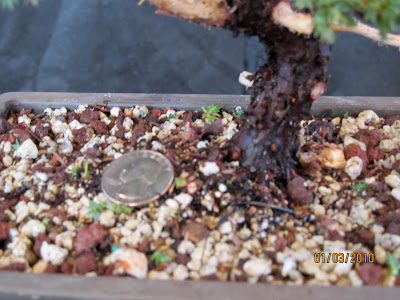 One of the keys to making a believable bonsai is having the right proportions. If all the elements, trunk height and thickness, branches, foliage masses etc., are proportionate the tree will look real. With a trunk as big around as a quarter and only 6" tall this tree has very good proportions. 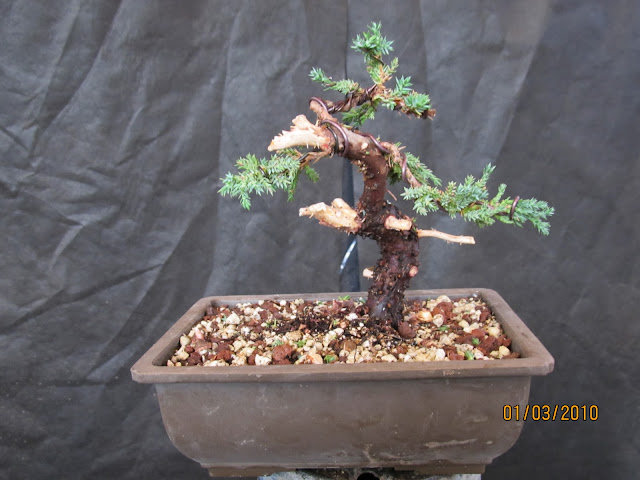 Sometimes there are not all the elements you need existing and you have to wait for them to grow as is the case with the first Pyracantha. 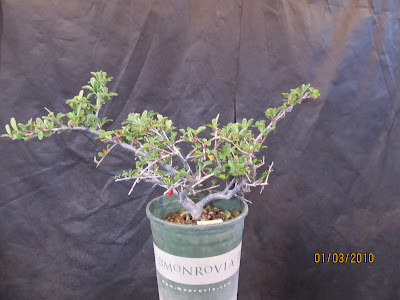 I fearlessly went to work with my branch cutter and cut away everything but the trunk line and a couple of small branches to keep the tree growing. Again there was quite a bit of trunk under the soil line. The dark area at the base of the tree was all buried. 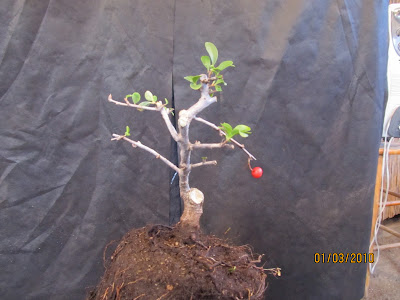 After further inspection I decided the top had to go, to create more taper and finer branching in the upper part of the tree. I also severely root pruned it since I removed so much of the top and planted it into a training pot. 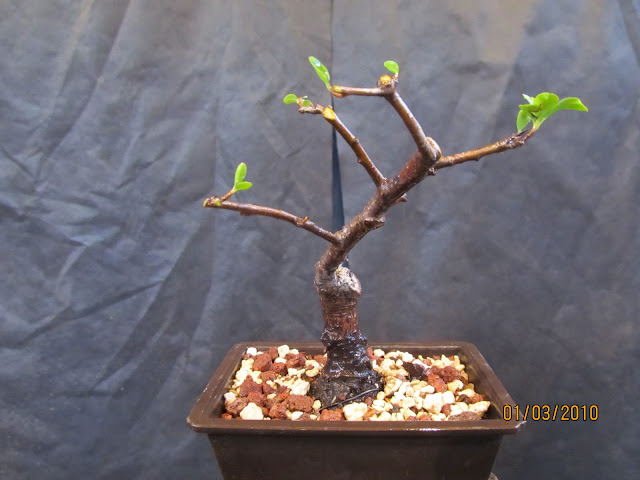 Where new growth pops out will determine the future of this tree. It may someday make a nice little tree 4-5 inches tall with a trunk bigger around than a quarter.
The next up is the boxwood. 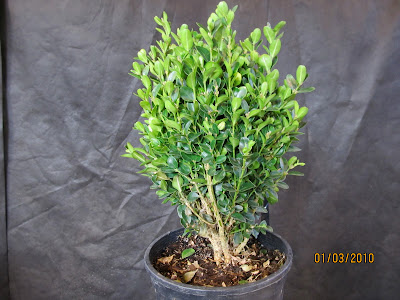 Using the same steps as above I discover that what I originally thought was a multiple trunk plant is actually a single trunk buried in the soil. After removing some branches I decide on a shape for this plant.
I think we'll try for a broom style tree, such as a large deciduous tree growing in a field somewhere.
I start by removing branches that are too big as well as too small in an attempt to get the proportions believable. 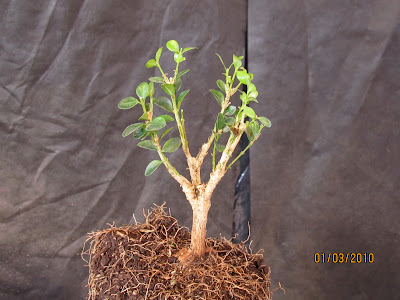 Again after a severe root pruning I plant the tree into a training pot. I also used a little wire to help better position some branches. 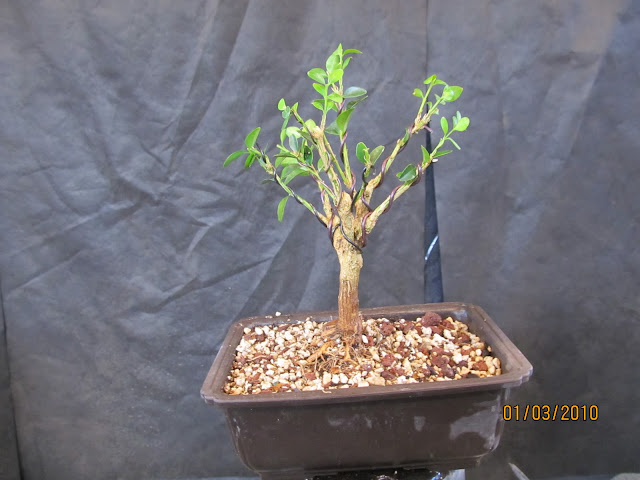 Again not a world class bonsai by any means but the foundation of a not bad tree. A year or so of selective trimming and I should have a believable tree.
That's all for this post! I hope that it has been informative and takes away some of the fears about starting out. The only other thing I'd like to add is to take your time finding material and discovering the tree within. Enjoy the process.
As always I appreciate any comments you may have.
Posted by Bonsaibp at 7:32 PM 2 comments: