In this post I going to show and talk about a few different works in progress. One new project with a Japanese Black Pine and follow-ups on two previous projects, a tall Atlas Cedar and a Juniper bent using re-bar. Hope you enjoy.
Lets start off with the Japanese Black Pine. I won the tree in a raffle at the last California Bonsai Society Convention. It was in pretty sad shape when I first saw it. The soil was terrible, heavy and very compacted and stayed wet. The rest of the tree was no great shakes either, but what the heck it only cost a buck for the raffle ticket. 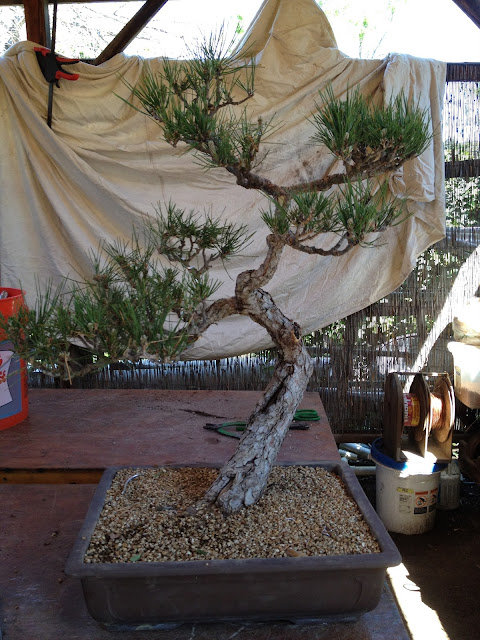 As you can see there's not much there. For about a minute I toyed with the idea of making a bunjin style using just the top branches but quickly discarded that idea.
It's pretty obvious that the best option for a bonsai is to use just the lower branch.
Out came the branch cutters. 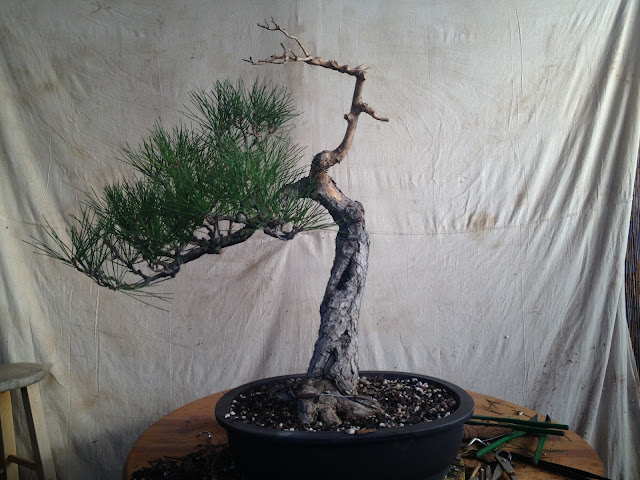 I cut off the two upper left branches leaving a jin from one of them. Then I cut off some and jinned the rest of the top branch. I also transplanted the tree into a good bonsai mix at the same time. After this i pretty much only watered and fertilized to allow the tree to recover. By early this month it was strong enough for a little more work. 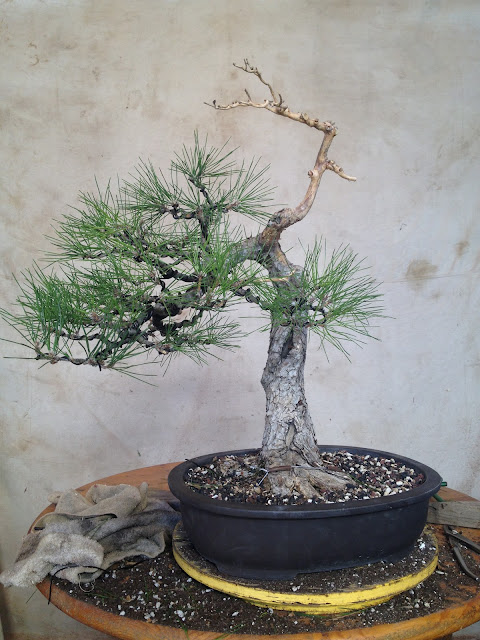 I cleaned up old needles, did some minor trimming and wired the whole tree. It should look pretty good in the next couple of years.
The next tree will be familiar to those of you that read this blog. Its the large Juniper that I used rebar to bend. The beginning work can be found here-
http://bonsaibpsbonsaiblog-bonsai.blogspot.com/2012_03_01_archive.html
This is the third round of work since starting in March. In the first round I determined branches, made some major bends and wired primary branches. Then I did the initial work on the deadwood.
This next phase involves using a clamp made for woodworking as a jack and guy wires to further compact the bends and shorten the tree. Then it was fully wired. Here is the tree before this work. As you can see it's growing pretty well. 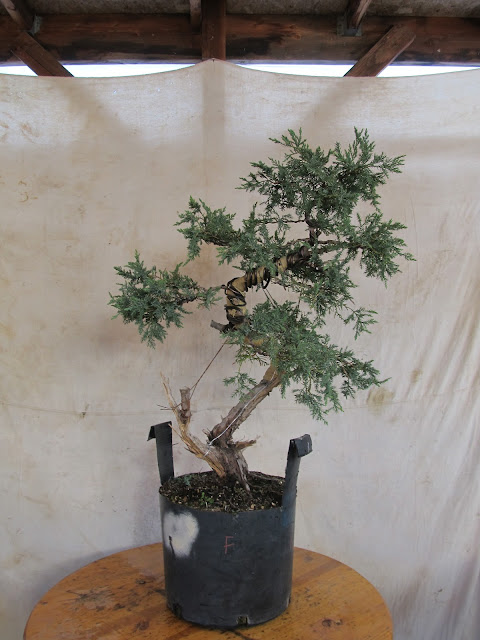 It's still really tall though so I decided to further compress the bends to try to shorten it. 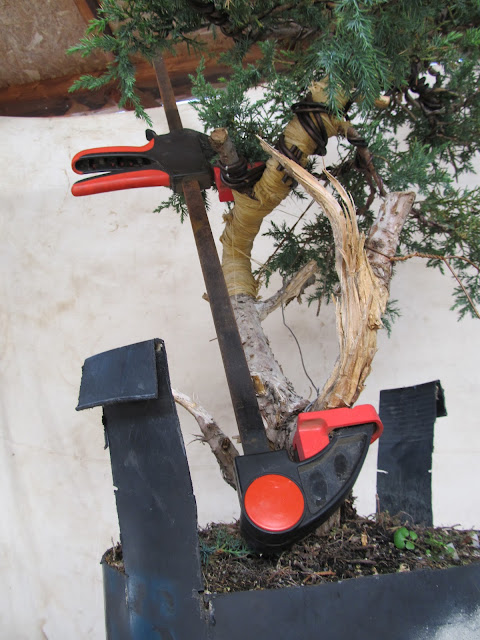 Using a woodworking clamp as a jack I compressed the first bend. When it got to as far as I thought was safe I used copper wire to make a guy wire to hold it in position. 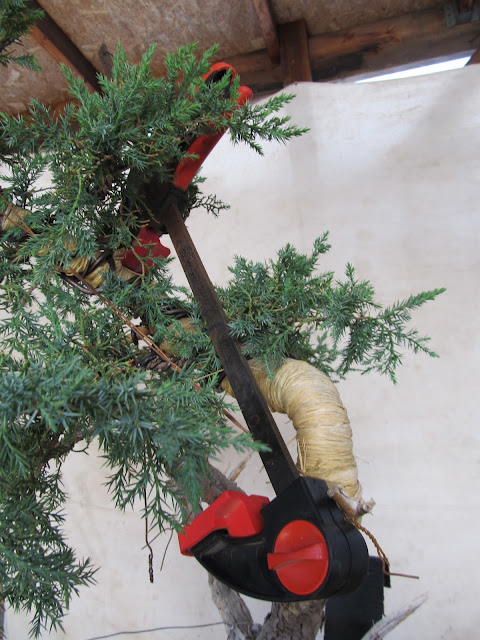 Then I did the same thing to the upper bend. After compressing the bends and securing them in place with guy wires I wired the whole tree.

It's hard to tell in the photograph but it's about 6 inches shorter then when we started this phase.
The last tree I want to talk about today is the tall Atlas Cedar that I started last November. The original post can be found here-
http://bonsaibpsbonsaiblog-bonsai.blogspot.com/2011/11/cedar-bonsai-from-large-nursery-stock.html
The tree was growing so well I needed to take the wire off in early August. In mid October I decided it was time for another haircut and wiring. Here it is before the work. 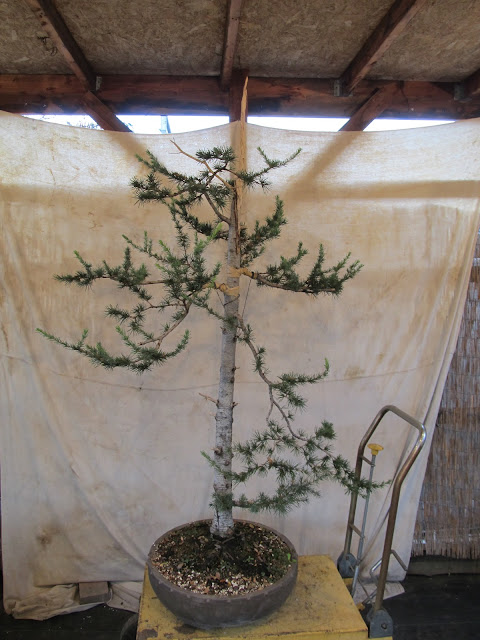 As you can see this is a tall tree I had to stand on a milk crate to wire the top branches-and I'm 6"3"! 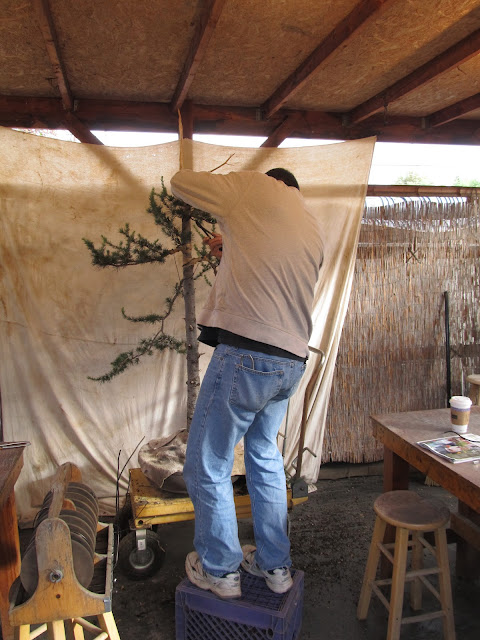 Here's the tree after the work. I'm probably going to shorten and simplify the apex, but that can wait. I'm pleased with the progress with this tree in such a short time. 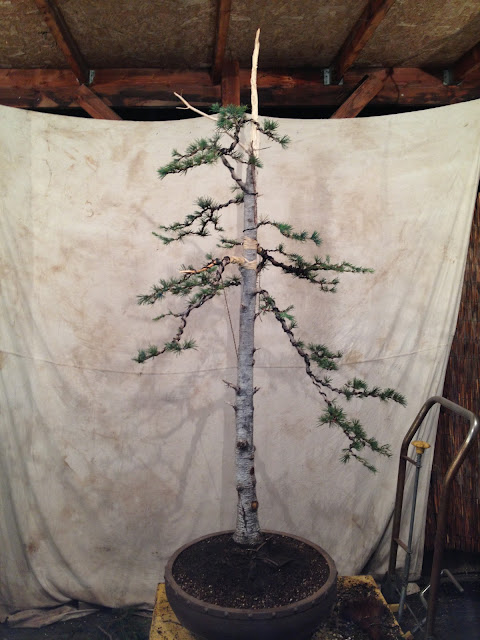 I want to thank you for taking the time to read my blog. I'm always looking to hear your comments and suggestions.
Posted by Bonsaibp at 10:55 AM 2 comments: