Juniper group planting on a stone

Hello. Today I want to discuss the making of a group planting of Foemina Juniper ( aka American needle juniper) in or on a large piece of stone. The stone we're using is available throughout southern California from building supply yards. It is called Mexican Bowl and as you can see it is aptly named. 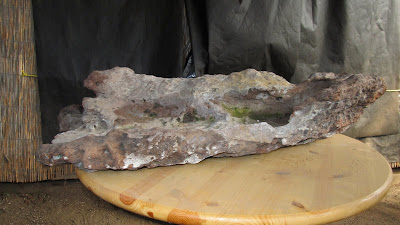 When trying to do a planting on a flat stone it can be a challenge to get the trees planted securely. This stone is deep enough that, that won't be an issue. Besides the places to plant, this stone has color  and texture variations that make it a good choice for a group planting.

The first step is to gather my materials. So I went off to the back of the nursery and about 30 minutes later I had these all picked out . 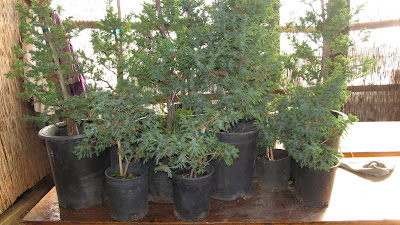 What we have are 13 Foemina junipers varying in height from 8 inches to maybe 30 inches and from 2 to 7 years from cuttings. I've grown this material so I know that the roots are in really good shape and the trees are nice and healthy. Usually I recommend taking trees from a five gallon can to bonsai pot size over two seasons. But we've already root pruned the bigger trees a couple of times and I know they'll have more than adequate roots. We will also be remove a large percent of each trees foliage which is what allows me to reduce the roots so severely.

The vision I have for this planting is one of a group of conifers high up in the mountains, almost at the tree line. As such one would not expect full lush trees. Trees growing in those conditions are subjected to many extremes. High and low temperatures, winds,rains, snow and usually they're growing more in rock than soil. These trees will have fairly sparse foliage and show the effects of their growing conditions. There would be areas of deadwood where the snow or winds has caused branches or even the tops of  some of the trees to break. So we will begin today to create some of these effects. I'll create some jins and sharis on the trees and leave only minimal amounts of foliage . Here are some off the trees after the first pruning. 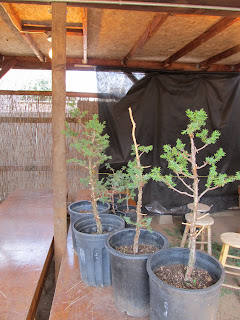 After pruning and creating some jins I wired the branches and pulled them into a downward position.
Here are the trees after the pruning and wiring. 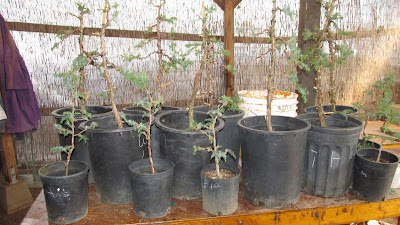 I want to create two levels on this stone so I'm going to use some muck to make a wall between the upper and lower section of the stone. 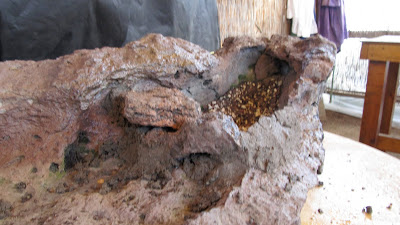 Now the next step is to do the root pruning. As you can see there are plenty of fine roots and the root ball is pretty small. I do this to all of the trees. 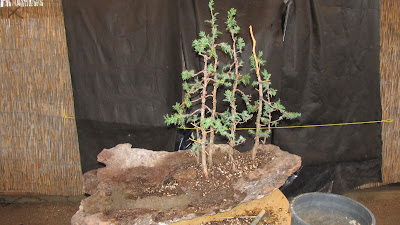 You'll notice in the above photo a wall of muck around the outside of the lower part of the stone. This acts as the "walls" of the stone to hold everything in place. Its also a great medium for growing moss.
Next we place the second group of trees. Again varying the spacing and heights. 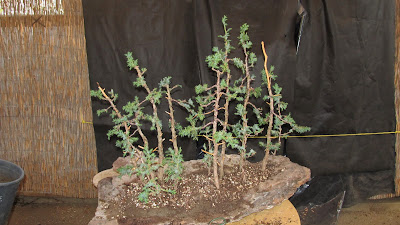 Now we'll place moss on the muck both to cover it up and to help keep it together as it grows. I use a couple of different types which adds color and textural changes to the planting. 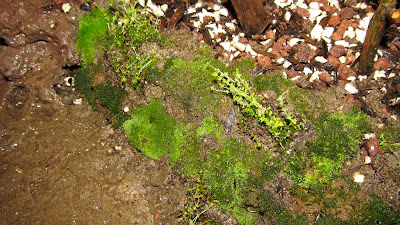 And here is the finished planting. In a few months the foliage pads will start to fill out the moss will spread a bit and it should be a very natural looking group planting. 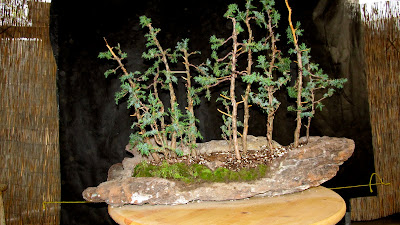 Some of you may be wondering about muck. It is a combination of clay and peat moss mixed together than water is added until you have a putty like consistency. It is used as above to form walls on stones, especially when flat slabs are used. It can also be used in root over rock plantings, to help adhere plants to a stone and sometimes on the bottom of moss being added to a bonsai for show purposes. The moss really likes growing in the muck and not so much growing on a typical bonsai mix.
I really hope everyone enjoyed today's post. If you have any comments or questions please leave them below. Until next time...
Posted by Bonsaibp at 7:03 AM 2 comments: