Today I'm going to talk about the next phase of the work on the big juniper from the rebar post.
(  http://bonsaibpsbonsaiblog-bonsai.blogspot.com/2012/03/rebar-for-bonsai.html  )
This is how we left the tree last time. 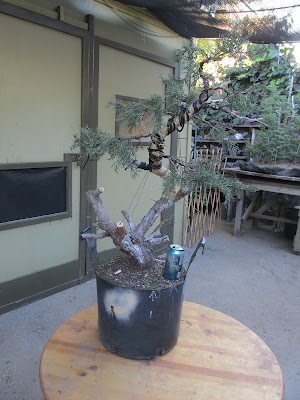 The work today is going to focus on the initial jin and shari work.
We need to do something with all those large cut off branches as well as add some interest to the straight second section of trunk. What we are going to do is to create some jins (dead, debarked branches ) and shari ( debarked areas of the trunk ).  This will do several things- it will disguise that fact that there are man made cuts,it creates taper and shortens cut branches, it distracts the eye from less interesting areas and  it instantly adds age and drama to the tree. There are a number of ways of doing this. Power tools can be used with excellent results. It can also be done using hand tools which often gives a more natural looking result. That is what we'll do today. I'll probably use some power tools in the next phase but I want to keep their use to a minimum. 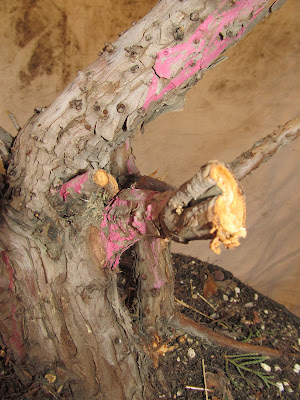 First thing I did was too mark the areas I wanted to work on. It really helps to do this first, it's like having a road map. If you chalk the wrong areas it can be wiped off. If you carve or remove bark it can't be undone. So I usually layout the areas first.
Instead of using die grinders or other power tools I'm going to use a knife, trunk splitters and jin pliers. 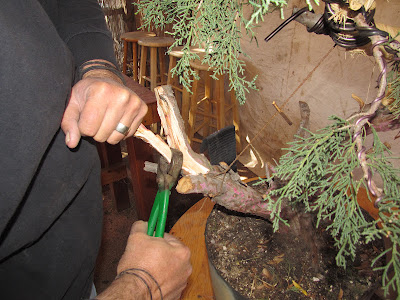 Here I'm using a trunk splitter to split off thin strips of what was the second trunk which I then grab with the jin pliers and twist and pull those sections off. I do small strips at a time, not rushing it. 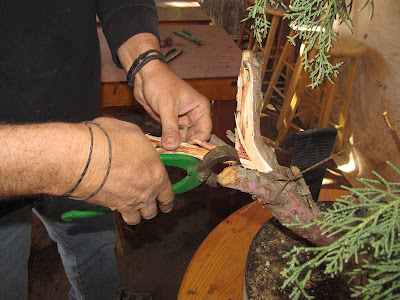 I go along the whole branch taking bites and peeling off split sections. Doing this achieves a number of things. It adds taper to what was otherwise a broomstick looking branch. It reduces the size of the branch. And it leaves many details and grain that would be lost with power tools. 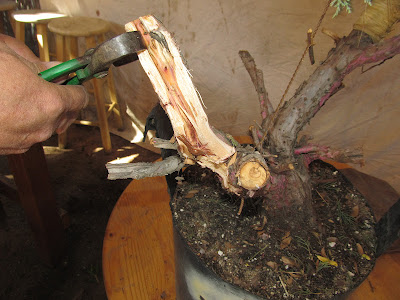 I use the same technique on all the remaining branch stubs and the smaller trunk that was already dead. 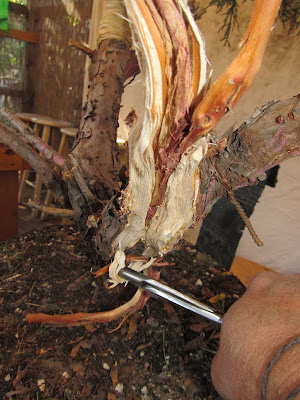 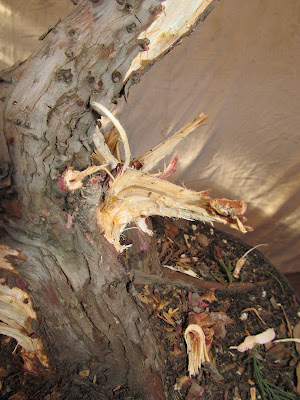 For the shari shown I made cuts through the bark on the trunk with a knife so that when I peeled the bark off it didn't tear outside of the area I wanted shari in. Since I still need the guy wires in place I had to leave the tops of those branches that they are tied to undone. When the wires can come off I'll finish those areas. 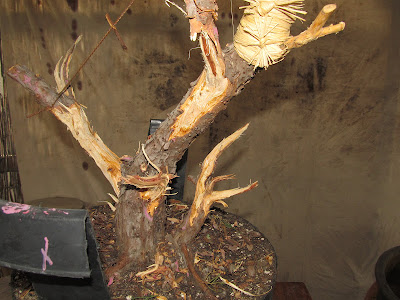 Notice the details of the grain and texture of the wood. I could never have achieved something so natural looking with a machine. As the wood dries out the grains will open and become even more natural looking. I'll probably use a soft wire wheel or sanding flap to remove the little fibers and soften some of the sharper edges but that's about it. 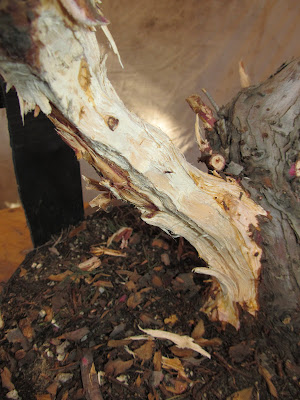 So with the end of the second stage of work on this tree which has taken about 4 hours total, we've been able to go from this 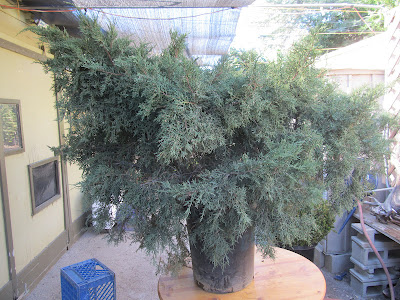 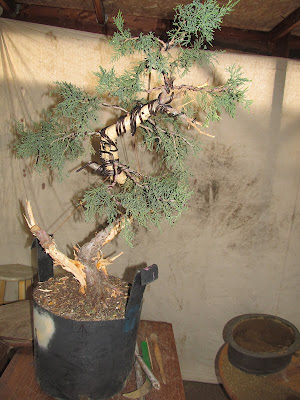 The next step will be to wire the entire tree down to the smallest twig. Of the course of the summer I'll fertilize, pinch and probably trim back at least once, maybe refine some of the deadwood and then this fall or early next spring I should be able to get this into a bonsai pot.( Not the one in the picture that's way to small.)

That's all for this time. I'd like to hear any comments or suggestions you may have. Happy spring!
Posted by Bonsaibp at 1:48 PM 6 comments: